This page tells you how it all started. We describe some of our earlier trips to Rwanda and also to Congo. But if you want to know what we are doing now, go onto our Progress Tab.  Since 2015, we have been posting blogs there, some of them sent directly from Rwanda.

Other pages on this Website (accessed by clicking the ‘Tabs’ above the main picture) include ‘Welcome to our Vision’, ‘Where We Go’ – which gives a short factual introduction to Congo and Rwanda, and finally, ‘What we do’ – which gives you a full account of our movements and activities when we are in Rwanda. This is the largest section of the website.

Summer 2009. In the summer of 2009 Ethne and Claude Scott were at a 70th birthday party when, over a glass of wine, a mutual friend of the ‘Birthday Girl’ asked them: ‘How would you like to come to Rwanda with us? Our church has links there and a group of us are going next January’. He went on to explain that the President was introducing English as the official language in place of French and we could help with what they were   planning to do at a secondary school in Cyangugu. 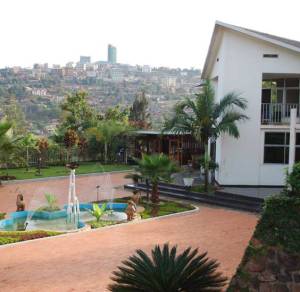 The Scotts had no hesitation in saying ‘yes’. Claude had a strong emotional link with Africa having lived in the Congo as a child of missionaries during the Second World War’. The school in question – Jill Barham School – was situated in Cyangugu. When Claude looked this up on Google Earth, he was surprised and really thrilled to find that it was no more that 120 miles away from Baraka in Congo where he had lived with his parents. After much patient research with the Assemblies of God in the UK, (the parent missionary church his parents had gone out with) he made contact with Christian ministers there and made arrangements to visit Baraka.

January 2010. The Scotts joined the group from Southover Church in Lewes for a two-week visit. Their programme included activities in Kigali and Cyangugu, which formed the basis of a later visit to Rwanda from a group of us from the Glaven Valley Benefice in North Norfolk. You will find more about our activities under the section headed ‘What we do’.

During this visit, Claude, accompanied with 3 Congolese ministers, made his 3-day journey into Congo. It was quite an adventure and a life-changing one at that! First of all, he was not at all ready for the kind of welcome he would get. People still remembered his father’s extraordinary ministry there and they treated him like a long lost friend as well as a VIP. But there were problems in transport, accommodation and generally meeting everyone’s expectations. First of all, the 4×4 they would be using belonged to the church and needed two new tyres and a tank full of diesel before they could set off! The truth about poverty in Congo soon became very evident. By the time they were ready to leave, they had already lost half a day! This delay put pressure on time and almost every meeting arranged took place much later than planned. The road down was really rough. Frequently, when they came across a bridge, they stopped, had a good look at the state of the bridge and the river bed before deciding whether use the bridge or drive through the water. The ‘hotels’ they used were truly rudimentary, electricity and water being luxury items!

The road took them southwards close to the western shore of  Lake Tanganyika. At almost every village, they stopped to  meet local Christians, visit the church and the adjoining school. When schools were in session, they went into classrooms. Nearly always, there was an impromptu service in the church. Nearly always, Claude was asked to preach. Nearly always, he was given the history of that church, and was told: ‘This is your father’s legacy’. Nearly always, he was given a list of things that were needed – books and furniture for the school, repairs to the roof etc etc.. But, actually, you didn’t need to be told that – you could see it. The most moving part was when he reached Baraka and was able to visit the house he had lived in as a boy.…the mango tree, lake…all the memories came flooding back,  except that the whole compound was now occupied by UN peacekeeping troops from Pakistan. A stark reminder of the situation there.

The service at the local church was especially moving as was the meeting with many pastors who had come to meet him. They asked for all sorts of help, but the request that stuck was for Biblical teaching. With western missionaries long gone, and no access to books, they yearned for teaching. This cry for help stayed with Claude on his return.

He thought hard and long how he could achieve this. Then 6 months after coming home, he learned that Langham International had just published an African Bible Commentary, written by Africans for Africans, in Swahili, their local language. Langham offered to supply him with all the books he needed, free of charge, as long as the training was also totally free. Pastors there are poor. He needed to raise enough money to transport them from all over DRC to one place, feed them and accommodate them for a week. Some took a week to get there. Some travelled 2000 kms. With the help of many Christian friends the £10000 needed was raised but in addition, the Barnabas Fund also offered to cover the costs. He had twice the money he needed.

January 2011. Claude set off for Congo, in advance of his wife, who joined him later as part of a second visit to Rwanda. Congo is the sort of country you don’t visit just once! He conducted a week’s training for 120 church leaders, including 20 women, at Uvira, using group learning based on work sheets on two books of the Bible. They had never learned for themselves before, being used to ‘top-down’ didactic teaching. They were surprised at how much they could do for themselves. From a hesitant start, they became very animated and it was a delight to see the progress made. They couldn’t be separated from their books. Having a Bible was a privilege; having a large commentary was just something else!

a woman delegate receives her copy of the commentary

Then there was thesinging, the eating together, the joy of actually being together – this had never happened before. The distances were too long, the costs too high.

It was a most extraordinary experience for everyone. The pastors left refreshed and renewed, equipped to use a most valuable resource back in the own communities.

Claude left exhausted but exhilarated but still with £10000 available to dedicate on  work with Congolese ministers!

Claude returned to Cyangugu to join the Southover group for the rest of their stay in Rwanda. They worked in a local girls’ school, visited nutrition clinics for under-nourished children,

enjoyed a truly African wedding at the tin-roofed Cathedral, had clothes made for them by members of the Mothers Union, built a house from mud and wood, took part in 3-hour Sunday services, got involved in water management, and a whole lot more. But most important of all, they ‘got alongside’ Rwandans who were still living with the trauma of the genocide of 1994. They were truly moved their stories.

During this time, Claude considered deeply what he should do next. Although he only meant to visit Congo once, he had already been twice and he now felt that he should go again. After talking with others, and praying about it, he decided to offer the same training for ministers from a much wider range of denominations across the country, this time to train, say 60 of  them in the use of the commentary so that they, themselves could go back and train others.

He would be joined by Richard and Prilla Rowland from Southover Church who would offer training in the whole area of AIDS, which was, and still is rampant in Congo. The idea of this project was warmly welcomed  and so plans were made for this seminar to take place in Bukavu.

During the summer, the group from Southover Church came to Blakeney for a reunion and we organised a Rwanda-type Sunday morning service at the church, but not lasting for 3 hours! One of the group, Rob Hoy gave a demonstration of water filters he was beginning to take out to Rwanda. Everyone was so impressed – this was the beginning of regular and very generous giving to enable many such filters to be taken out in subsequent visits.

Claude set out with the Rowlands and also his son, Philip  and daughter Beccy who jumped at the idea of spending 5 days or so in Congo to experience life there and also to learn about their grandfather, whom they had never known. They took 3 boxes of water filters with them and were surprised but thrilled to find John and Gill Griffith of the Safe Water Trust on the same plane. They had first hand training on how to use them! The bible commentary training sessions went really well, people leaving not just with the book they and been using for the week, but with 7 or 8 others to take home wherever they lived in DRC to give to others and train them in their use. We know that this has been done and done well. We keep being asked to send out more books! Some of the local training has taken place as far away as Lubumbashi, south east DRC, some 1000 km away from Bukavu where the initial training took place.

Philip and Beccy were able to get first hand accounts of their grandfather’s work.

Philip and Beccy learn about their grandfather’s work

After their return, they thought Rwanda was a holiday camp compared with DRC!

After the sessions had finished Claude spent the weekend in Bukavu preaching at churches on the Sunday. The most lively, uplifting and moving services he has ever attended. He subsequently joined the rest of the Rwanda group in Cyangugu where they continued with their work as on their previous visit.

Back in the Glaven Valley, Claude gave a talk about these visits. He was also able to show to whom the water filters had been given. Such was the interest, that a number asked if they could go! So, plans were made for a group to set out in January 2013.

10 of us set off for Norwich at 4 15 am to get a plane for Amsterdam and then on to Kigali. But this was winter in the UK! Our flight was cancelled because of snow, so we spent a day in Norwich and set off one day late arriving in Kigali on the Sunday evening, where we met up with 5 people from the Southover Church who were joining us.

This was a most wonderful trip. We describe most of what we did in the section headed ‘What we do’. When we returned to North Norfolk, we kept being asked: ‘Can we go back?’ Well, we have done our research, and it looks as if there are enough people wanting to go for us to plan another trip.

You’ll find the full account of out trip under the section headed ‘‘What we do’.

Go to our Progress Tab to see what happened as 10 of us from the Glaven Valley spent 2 weeks in Rwanda.

There are 14 of us planning to go this time. Follow us by clicking on the Progress Tab.

8 thoughts on “Our Story”

The Africa Glaven Mission is gearing up for another trip to Africa in 2015, taking vital water purifiers and other equipment, plus books and Christian teaching aids