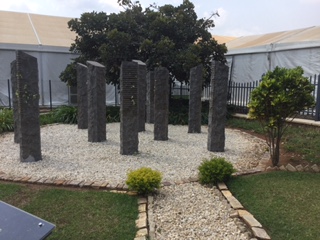 Today’s highlights are about two very different Memorials of the Genocide and a very moving testimony of a young woman who, at the age of 8, lost her mother, her father and 5 siblings in the Genocide.

Our morning visit was to a Memorial to the 10 Belgian soldiers who were shot and killed as they tried to protect the then Prime Minister of Rwanda. This is a little known and little visited centre but, through a well-thought out mix of images and simple commentary, we learned about yet another atrocity amongst all the others.

The images above show (i) the bullet-ridden exterior of the building where the soldiers tried to protect themselves as, being under the direction of the UN, they were forbidden to return fire in self-defence; and (ii) 10 memorial stones, each representing one of the soldiers, and each having a number of carved grooves equal to their age.

This afternoon, we visited the main Memorial site in Kigali, which tells about the history, the horrors and the aftermath of the genocide. We spent some moments of quiet in front of the burial site of 250 000 bodies.

Then we heard Yvette’s story. Sitting in a quiet garden space, we were told about her loving and close family. We learned how, as the genocide began to take effect in their village, at first they were isolated, then split apart. Against her mother’s advice, she went to visit a friend in a house nearby.  This family protected her. When she went back home, she found that all her family had been killed. She told us how, years later, she came across Solace Ministries where she found comfort and a spiritual home. She met so many people who had suffered loss and felt pain as she had. Solace have supported her through her education and she is now completing her Master’s degree. We were deeply moved.

The Africa Glaven Mission is gearing up for another trip to Africa in 2015, taking vital water purifiers and other equipment, plus books and Christian teaching aids